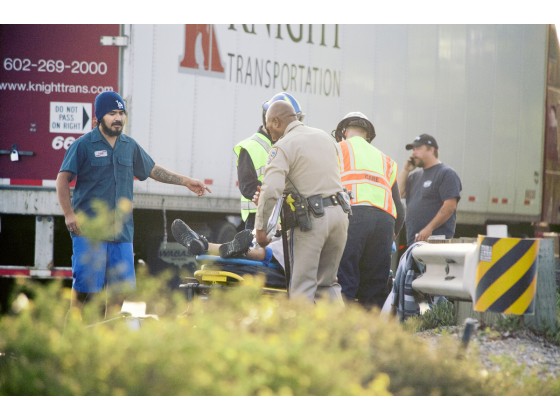 A CHP officer talks to the driver of a Nissan Altima as he is treated by medics after he was injured during a five-car collision involving a big rig truck on the eastbound 91 freeway at Euclid St. on Thursday morning in Anaheim. KEN STEINHARDT, STAFF PHOTOGRAPHER

Two people were sent to the hospital after a big-rig and four vehicles collided Thursday morning on the eastbound 91.

California Highway Patrol officials reported the crash around 6:55 a.m. on the eastbound 91 near Euclid Street.

The man driving the silver Nissan Altima was taken to UCI Medical Center in Orange after his car crashed under the big rig’s trailer, CHP Officer Green said at the scene.

Authorities said the woman in a silver Chevy Cruze, where the airbags deployed following the crash, was taken to a hospital at her request to treat unknown injuries.

Both are expected to survive, Quesada said.

CHP officials issued a SigAlert for the two blocked lanes and expected the freeway to be clear for commuters around 8 a.m.