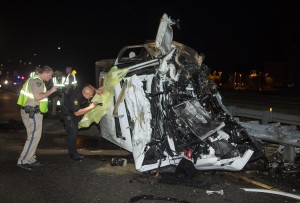 A CHP officers and an Orange County Sheriff Coroner investigate after a male was fatally injured in a solo fiery crash on the Northbound 133 Freeway near the Northbound 5 Freeway around 1:30 a.m. Wednesday morning in Irvine.

Around 1:30 a.m., Wednesday morning, CHP responded to reports of a solo crash on the northbound 133 freeway near the northbound I-5 freeway. The male driver of a pick up truck appeared to have lost control of his vehicle, hitting a guardrail and sand barrels and then striking a concrete support pillar and then flipping onto the vehicleÕs side. The vehicle caught fire, becoming fully involved, while the driver was trapped inside. Orange County Firefighters were able to extinguish the blaze, but declared the victim deceased on the scene. The northbound 133 has been shut down, with no estimate if when it will be reopened. CHP Santa Ana area office will be handling the investigation.