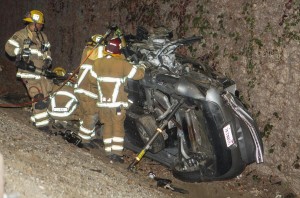 Orange County Fire Authority work to free a trapped male after he lost control of his vehicle while leading Westminster CHP on a high speed pursuit on the Eastbound 91 Freeway near Valley View Street shortly after 2:00 a.m. Friday morning. He was transported to UCI Medical Center in grave condition.

Just after 2:00 AM, officers assigned to CHP Westminster Office were pursuing a vehicle eastbound on the 91 freeway. The driver of the vehicle lost control, hit the guard rail, and flipped over onto itÕs side, trapping him. It took Orange County Firefighters approximately 45 minutes to extricate the driver. Paramedics transported him to a local trauma center, in grave condition. An officer at the scene stated that the driver was speeding over 110 MPH prior to the crash. The driver of the vehicle was pronounced dead sometime after he was transported.