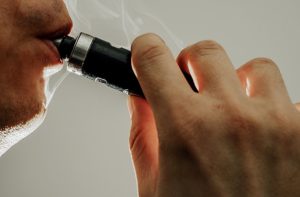 Vaping devices and e-cigarettes have become increasingly popular because they are being marketed as a safer alternative to tobacco smoking. A recent poll showed that the public was about evenly split between those who thought that electronic cigarettes were less harmful than conventional cigarettes, and those who believed that e-cigarettes were as bad as or worse than regular cigarettes. Unfortunately, there is no long-term safety data about e-cigarettes. What we do know is that some of these devices have design flaws that can lead to serious injury or even death.

Problems With the Lithium-ion Batteries

Also, it has been revealed that some companies that manufacture vaping devices cut costs by purchasing inferior lithium-ion batteries in their products and could lead to an explosion or fire. Some e-cigarette users have suffered burns when the e-cigarette devices accidentally ignite when buttons were inadvertantly pressed while in the user’s pocket.

Defects in the Design Can Lead to Injuries

While most of the lawsuits filed thus far have focus on the batteries exploding or catching fire, defective batteries are not the only cause of personal injury associated with defectively designed e-cigarettes.

In some cases, the problem stems from the design of the unit that allows a consumer to replace individual parts of the device instead of replacing the entire device. If the device is not re-assembled property, a serious injury may occur. A debate is ongoing about whether this is a consumer error or a preventable defect in the product’s design. The matter could also be an issue with a lack of adequate warnings and labels.

Although some studies show vaping can be safer than tobacco cigarettes, the opposite may be true. E-cigarettes heat and vaporize a flavored nicotine solution that can be the equivalent of 20 packs of cigarettes. One Juul pod, for instance, has just as much nicotine as a pack of cigarettes. Because of the various flavors and the “safety” claims by manufacturers, an individual could actually be using more nicotine than if he or she was smoking traditional cigarettes.

The truth is that science is still learning how vaping and e-cigarettes impact a person’s health. This generation is the test subjects because it is really too early to gauge whether long-term health consequences will soon become the focus of legal action in the future.

Contact a California Personal Injury Lawyer to Discuss Your Case

If you have been injured while using a vaping device or e-cigarette, you may be entitled to compensation for your injuries. A personal injury lawyer at Duque Law Group will review the circumstances and facts in your case, researches current laws and analyzes your case to provide you with an explanation of the law and your chances of recovery if you file a product liability claim.