Effective in July 2018, a new state law will require drivers of commercial buses and their passengers to wear seat belts or face fines of $20 for the first violation and $50 for the next. Parents will be responsible for making sure children under age 16 are buckled up, and will be allowed to hold children under the age of 2 years on their lap.

The legislation, SB20 by state Senator Jerry Hill, D-San Mateo, passed both houses without opposition, and was signed by Governor Jerry Brown.

State law requires passengers in cars and school buses to wear seat belts and a recent federal law was put into place requiring some types of commercial buses to be equipped with belts. According to the National Transportation Safety Board, rollover accidents kill 21 bus passengers a year and injure more than 7,900. Despite this statistic, no current law requires passengers on transit or tourist buses to wear the belts even though the board maintains that wearing seat belts will reduce the likelihood of death in rollovers by 77 percent.

The new state law also will require bus companies to keep seat belts in working order, and requires bus drivers to tell passengers before each trip that they are required to buckle up. 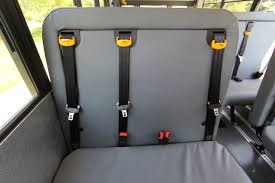