What Is Causing Lung Injuries for e-Cigarette Users?

The health risks associated with smoking cigarettes are well-known, but many people have switched to using e-cigarettes recently since it has been promoted as a safer option. However, recent events are making us question just how safe “vaping” actually is. We may soon realize that vaping is also hazardous to one’s health.

The rising popularity of vaping has been dramatic, especially among teenagers. According to a recent study, an estimated 2.1 million middle school and high school students reported using e-cigarettes in 2017; with an astonishing 3.6 million reporting use in 2018. While all states have age restrictions for selling these products, the laws are obviously not preventing use among teens and young adults. According to a 2017 survey by the CDC, nearly seven million adults 18 or older use e-cigarettes.

You may have seen news reports of lung problems, including deaths, linked to vaping. As of September 2019, more than 800 cases of lung injury linked to e-cigarettes have been reported, as well as 12 deaths. Due to this outbreak, the Centers for Disease Control and Prevention (CDC) has recommended against using any vaping or e-cigarette products.

According to the CDC:

So far, no exact cause of these lung injuries has been identified, and there is no single product or substance involved in every case. However, the injuries have occurred for users of both nicotine products and substances derived from marijuana, including CBD and THC. 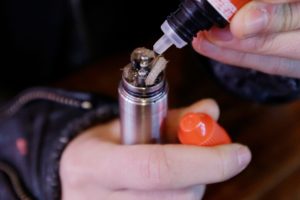 The problem seems to be that e-cigarettes use a battery-powered device that heats a liquid to form vapors (or, more accurately, aerosol) that the user can inhale. These devices heat up various flavorings, nicotine, marijuana or some black market substances that are potentially harmful.

It has also been suggested that even if the chemicals used in e-cigarettes are not inherently dangerous, inhalation of these chemicals in the form of vapor can be harmful. Vapor inhalation can cause inflammation of the lungs, resulting in the production of mucus and high levels of enzymes, which may lead to irreversible damage to lung tissue.

Some studies have identified multiple substances in e-cigarettes that may play a role in cases involving lung disease, including:

Perhaps vaping should be viewed as a “lesser of evils” for current cigarette smokers. Still, just how vaping affects our overall health is uncertain. One way we will learn more is by people reporting possible vaping-related health problems to the FDA.

Until we know more, think twice about vaping. Federal and state authorities recommend avoiding all vaping until more is known. If you do decide to vape, avoid e-cigarettes bought “off the street” and stick with brand name e-cigarette products without modification (such as adding marijuana or other drugs).

These cases of severe lung disease among people who vape raise important questions about the safety of vaping. Perhaps we shouldn’t be surprised that lung problems might develop in people who vape: our lungs were meant to inhale clean air and nothing else. It took many years to recognize the damage cigarettes can cause. We could be on a similar path with vaping.

If you have been injured while using a vaping device or e-cigarette, you may be entitled to compensation for your injuries. A personal injury lawyer at Duque Law Group will review the circumstances and facts in your case, researches current laws and analyzes your case to provide you with an explanation of the law and your chances of recovery if you file a product liability claim.